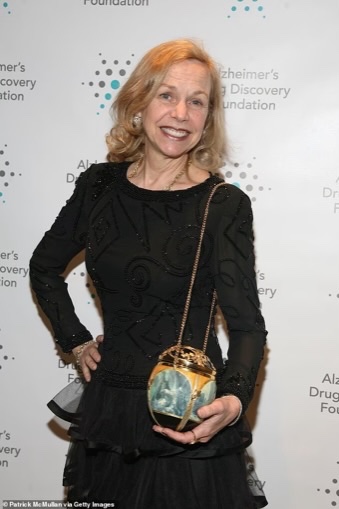 This story is definitely not what you think. Before going further, please stop at the end of this sentence and make note of what you think this story might entail. When you finish reading this story, compare it  to your initial thoughts. I guarantee you will be surprised.

Mitzi Perdue is an amazingly accomplished and unassuming lady. An heiress, war correspondent, philanthropist, author, and friend to many.  While this may imply a high profile life she avoids the limelight because what she does behind the scenes is save lives and stop criminal syndicates from harming vulnerable people.  In other words, she deserves high praise from all quarters but that attention only distracts her focus and determination to fight human tracking on the ground and, most dangerously, directly at the source.  For a variety of other reasons she would rather not be brought out from behind the proverbial curtain. Although, as she said, “if I run into serious trouble at least it will be in the act of doing something good and meaningful.”

Her daughter-in-law, Jan Perdue, is intimately aware of some “Mitzi stories” from the private vantage point of being inside the family circle. She summarizes her observations of Mitzi by simply stating “it is inspiring to know that in Salisbury Maryland, we have people like Mitzi who are quietly working behind the scenes to make a difference for people she does not personally know from all around the world…  She leads by example and passion, both of which are driven by the values of giving and service to others.”  So true.

Mitzi is a Senior Fellow with the Bosserman Center for Conflict Resolution at Salisbury University and in that capacity her mission is to disrupt then destroy as much of the human trafficking industry as possible.  It is a lofty and laudable goal that requires one-part James Bond ingenuity, one-part mission impossible intelligence activities and one-part sheer guts and determination. She has an abundance of all this and more. 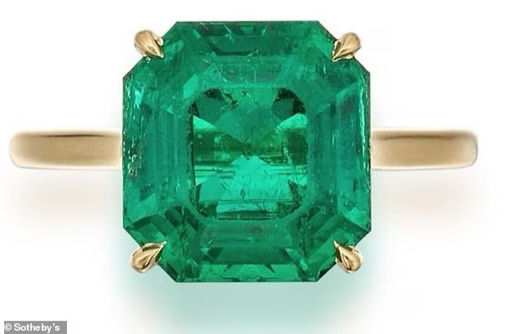 The ring is where her cover has been blown.  Mitzi’s husband, the late Frank Perdue, acquired an historic 5.25 carat emerald that was salvaged off the Spanish galleon the Nuestra Señora de Atocha that sank off the Florida Keys in 1622. He had the gem fashioned into a gorgeous ring for Mitzi and, until recently, it might have been handed down through the family for generations. But for the love of others she put it up for auction at Sotheby’s on December 7, 2022.  The ring was valued between $50,00-$70,000 with all proceeds from the sale going to humanitarian aid to Ukraine. The story of the ring and its sale was reported in over 100 newspapers worldwide including the New York Times and the Washington Post.  The day of the auction we tuned in live to watch the sale. When lot 102 came up for bid the price slowly rose. When the price went past the estimated value it is safe to say folks were happy.  But then it started to quickly climb and after a flurry of activity the gavel landed and it sold to an unknown bidder for a staggering $1.197,000!  No matter how much one might try, this is newsworthy.

That gets to the promise.  In August Mitzi went to Ukraine with Gary McGill of Kent England, and an SU Alum, Dr. Brian Polkinghorn, Executive Director of the Bosserman Center for Conflict Resolution, and several other individuals in the intelligence and security sector who wish to remain anonymous.  The trip was the culmination of months of meetings, dating back to early March 2022. When intelligence reports indicated it was safe to travel to Kyiv, the green light was given by Ukrainian officials to conduct an on-the-ground fact-finding mission.

From that mission came irrefutable evidence of Russian war crimes but it also produced something else: a promise.  During the course of our work, Mitzi made a promise to assist our friends in Ukraine. The most pressing need is to set up safe houses for women and children fleeing out of combat zones. Under stress, completely exhausted and often traumatized, these people are at the highest risk of being kidnapped and trafficked.  Mitzi also made a promise to assist law enforcement as their activities were deliberately impeded by Russian attacks on police facilities, communications, and patrol functions. 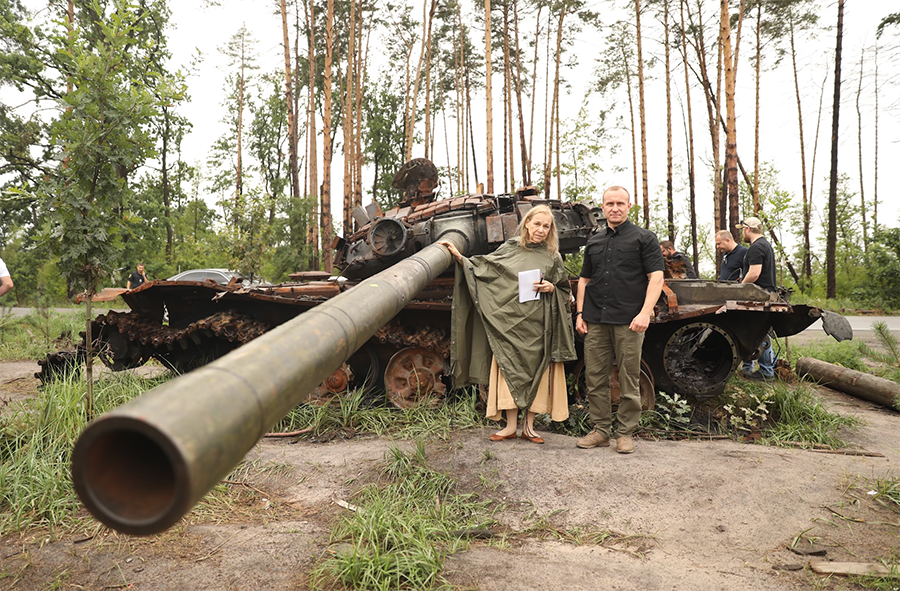 She went to work back in Salisbury on obtaining new patrol vehicles to replace the ones the Russian invaders destroyed or stole from the region around Chernobyl.  Why patrol cars? Ukrainian police need to keep Russian troops and scavengers from stealing irradiated metal and other materials from the exclusion zone. This is a global health issue because if irradiated materials get out of the exclusion zone people will be exposed to radiated materials leading to further disease and death.  Unfortunately, the evidence, we saw first hand, is irrefutable: a wide range of irradiated materials have been stolen by Russian troops and taken across the border into Belarus and then on to Russia.

As a war correspondent, Mitzi has vastly amplified worldwide awareness of these issues and, in doing so, also raised a substantial sum to replace some of the patrol cars as well as to rehabilitate buildings in secret locations throughout Ukraine that are specifically meant to get women and children off the escape routes, where traffickers pick off vulnerable people, and into safe houses. Here they can rest and recover as well as have access to resources and services that they need to be able to think a bit more clearly about their situation, to develop plans that are guided by safety and security measure and to otherwise make clear and reasoned decisions. 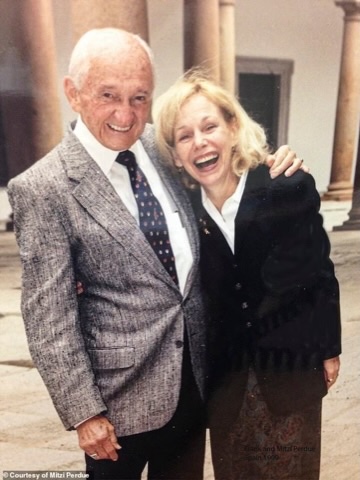 In December 2022 Mitzi made another trek to Ukraine to gather yet more information on-the-ground and to deliver those promised vehicles to the Ukraine Police.

If Mitzi hadn’t parted ways with a family heirloom, of incalculable sentimental value, and put the ring up for auction, then no one would ever know the real story.  Well, here it is and it needs to be told many times over. Her work is but one of many battles being waged in a longer, more encompassing, and aggressive war against human traffickers.  As the traffickers switch up their tactics and deploy ever more sophisticated evasive strategies, in order to stay one step ahead of the law, so too must we constantly change our methods to stay on their trail.  It is brave women, like Mitzi and those we met in Ukraine, who are leading the charge to confront this evil head on, and these are the people who need to be heard and helped.