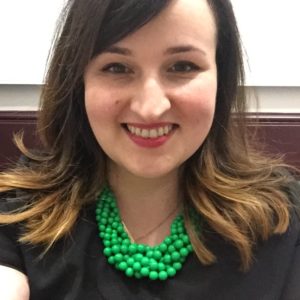 Alexandra Ginta Martin is an adjunct lecturer in the Conflict Analysis and Dispute Resolution Department and a research collaborator and practitioner at the Bosserman Center for Conflict Resolution. She has a Master of Arts Degree in Conflict Analysis and Dispute Resolution from Salisbury University obtained in May 2016. Alexandra’s professional interests gravitate strongly around teaching and she was a teaching assistant both at Salisbury University MD, as well as Lucian Blaga University, Sibiu, Romania.

Her academic background is in International Relations and European Studies, with a distinct focus on diplomacy and foreign affairs. Alexandra has a full professional and academic proficiency in English, French, Spanish and Romanian, and intermediate proficiency in German and Italian. While studying and living in Europe, she was involved in outreach initiatives and information campaigns directed at underrepresented ethnic minorities and social groups.

As a graduate assistant for the Center she has helped plan and organize events for the “One Person Can Make a Difference” lecture series, in addition to conducting extensive research for The Statewide Evaluation Project of Alternative Dispute Resolution and other projects. Alexandra has also co-initiated the implementation of a student peer mediation program at a local high school and conducted training sessions for student mediators and program coordinators.