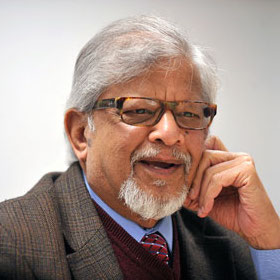 Grandfather taught Arun to understand nonviolence through understanding violence. “If we know how much passive violence we perpetrate against one another we will understand why there is so much physical violence plaguing societies and the world,” Gandhi said. Through daily lessons, Arun says, he learned about violence and about anger.

Arun shares these lessons all around the world. For the past five years, he has participated in the Renaissance Weekend deliberations with President Clinton and other well-respected Rhodes Scholars. Other engagements have included speaking at the United Nations, Chicago Children’s Museum, the Women’s Justice Center in Ann Arbor, Young President’s Organization in Mexico, the Trade Union Leaders’ Meeting in Milan, Italy, the Peace and Justice Center in St. Louis, Missouri, The Scottish Parliament and many more. Arun’s travels have also take him across the world to Australia, Croatia, Canada, France, Germany, Sweden, Ireland, Italy, Holland, Lithuania, Nicaragua, South Africa, China, Scotland, England, Japan and many others. He is also a very popular speaker on college campuses. Arun has now spoken at Universities and Colleges in all 50 states of the USA.

Arun is very involved in social programs and writing, as well. Shortly after Arun married his wife Sunanda, they were informed the South African government would not allow her to accompany him there. Sunanda and Arun decided to live in India, and Arun worked for 30 years as a journalist for The Times of India. Together, Arun and Sunanda started projects for the social and economic uplifting of the oppressed using constructive programs, the backbone of Gandhi’s philosophy of nonviolence. The programs changed the lives of more than half a million people in over 300 villages and they still continue to grow. Sunanda died in February of 2007 and the family is working to establish a school in poorest rural India in her name.

Arun is the author of several books. The first, A Patch of White (1949), is about life in prejudiced South Africa; then, he wrote two books on poverty and politics in India; followed by a compilation of M.K. Gandhi’s Wit & Wisdom. He also edited a book of essays on World Without Violence: Can Gandhi’s Vision Become Reality? And, more recently, wrote The Forgotten Woman: The Untold Story of Kastur, the Wife of Mahatma Gandhi, jointly with his late wife Sunanda.