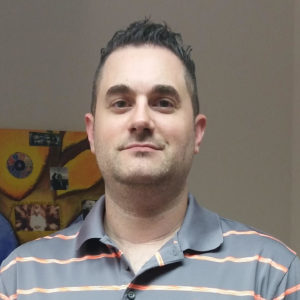 Robert La Chance, MA is the managing director for the Bosserman Center for Conflict Resolution, Inc. and a lecturer in the Conflict Analysis and Dispute Resolution program at Salisbury University.  He has worked at the Center in a variety of capacities since 1998, starting as a student volunteer.  Over the years he has been able to practice conflict resolution and the promotion of peace through a variety of outreach programs, grants and contracts.  He is a member of the Center’s education, grant writing, and research teams.  In his current role as the managing director he works in coordination with the executive director overseeing and participating in a wide variety of Center activities and programs, as well as playing a vital role in managing of the day to day operations of the Center and staff.

He is also the liaison between the Center, in its role as a teaching hospital, and undergraduate and graduate students in the Conflict Analysis and Dispute Resolution programs at Salisbury University.  He has bachelors’ degrees from Salisbury University in both Conflict Analysis and Dispute Resolution and Philosophy.  He also holds a Master’s of Arts in International Peace and Conflict Resolution from Arcadia University.  His primary research is in the areas of conflict analysis and dispute resolution in higher education, court alternative dispute resolution program evaluation, environmental disputes, international conflict intervention, conflict process and dispute systems design model building, sports as a vehicle for social change, and conflict resolution in sports.