About Advances in International Law and Jurisprudence: Enhancing the Role of the Judiciary in the Rule of Law (Oct. 2017) 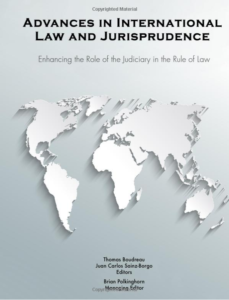 “Due to the agony and horrors of World War II, the Allied governments made solemn promises to their own and other peoples concerning self-determination, the creation of a United Nations and prosecuting war criminals that resulted, as argued in this book, a fiduciary Law of Nations common to humanity. Since these promises and wartime declarations were created directly between a government and its own people, below the level of a “state”, the resulting Law of Nations is self-executing and now governs the legal relationship of a government to its own and other peoples. In view of this, the judicial system and judges within each unique national jurisdiction now have an important role in applying and enforcing the critical new protections concerning human rights, humanitarian law and jus cogens norms that people around the world now possess within a pluralistic International Legal Order.”